You are donating to : Operation School Bell® At Operation School Bell, each child receives two shirts, a sweatshirt, socks, underwear, a gift card for pants, shorts or skirts, a gift card for shoes, a personal hygiene kit, school supplies and an age-appropriate book. Having clothes of their very own that fit properly has increased confidence and self-esteem of these students and has given them a sense of belonging to the school community. Parents, teachers and administrators have commented on how proud and happy the children are to go to school with all new clothes, many for the first time.

Operation School Bell is run entirely by chapter member volunteers who purchase the clothing, stock the “store,” maintain inventory and assist the children in selecting their new clothes. During the 2017-2018 school year, 1,362 children received new school clothes and supplies, 23,913 since the program began. Operation School Bell is not a revenue-generating program. It relies heavily on donations from grants and individual and corporate donations. 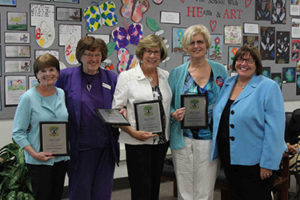 On September 8, 2015, Operation School Bell clothed its 20,000th child. Along with the 44 students and school personnel from Art Haycox Elementary School and Assistance League volunteers for the day, attending were the two people who were instrumental in establishing the program in 1993, Assistance League’s Barbara Houser and former Oxnard School District Superintendent, Richard Duarte. The Ventura County Star Reporter interviewed them and others while the photographer took many pictures for their newspaper article. Large banners, balloons and refreshments added to the festivities.